Home » Infertility » Learn The Truth About Natural Alternatives To Metformin

Learn The Truth About Natural Alternatives To Metformin

If you’ve been diagnosed with polycystic ovary syndrome then you may be prescribed a drug called metformin or glucophage. PCOS is a metabolic disorder in which you become insulin resistant which leads to inflammation, weight gain, and infertility. Insulin resistance also contributes to the acne and hirsuitism associated with polycystic ovary syndrome. Insulin resistance means your cells will not let insulin escort glucose into them for energy forcing your body to store the extra sugar as fat in your liver and belly fat.

Here’s three natural ways to heal your PCOS insulin resistance and avoid or get off metformin.

Studies have shown that taking a simple mineral when you eat is as effective as metformin. Chromium is an essential mineral that appears to have a beneficial role in the regulation of insulin action and its effects on carbohydrate, protein and fat metabolism. Chromium is an important factor for enhancing insulin activity. Studies show that people with type 2 diabetes have lower blood levels of chromium than those without the disease. Yes, chromium can help reverse insulin resistance associated with PCOS by sensitizing your insulin receptors to allow blood glucose to get into your cells.

Since dietary chromium is poorly absorbed, the best form of Chromium is chromium picolinate. Take 200-400 mcg with each meal. Up to 1000 mcg per day to reverse insulin resistance, lower testosterone levels, and increase your chance of conceiving.

A combination of Ayurvedic botanicals can help reverse PCOS related insulin resistance. Ayurvedic is one of the oldest systems of medicine originating in India. Studies have shown that these herbs improve insulin sensitivity and glucose metabolism helping you lose body fat and the high testosterone levels associate with PCOS. Pterocarpus marsupium also known as kino tree has potent flavonoids in its bark that have been used for centuries to treat diabetes. Gymnema sylvestre is a woody vine whose leaves have been shown to regenerate and repair the beta cells of the pancreas where insulin is produced which helps control blood sugar levels. Momardica charantia or bitter melon helps to control blood glucose levels as well as fat storage in your liver. Syzygium cumini also know as linn seed improves insulin sensitivity in body’s cells.

In my practice, I asked a dozen overweight women to participate in an eight week trial. All of them did a 20 minute HIT workout three times per week. Half of them also followed my insulin resistant diet. They all lost weight. But the ones who did both HIT and IRD lost the most body fat and had greater reductions in HBGA1C which is a blood test reflecting your blood glucose levels over two months.

The PCOS patients who continued the regimen of HIT three times per week combined with my IRD who also took Genesis Gold to balance their hypothalamus enjoyed regular menstrual cycles, less acne, and those who wished conceived did so within six months. 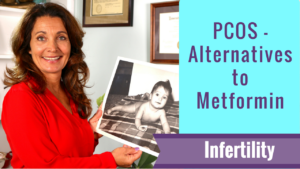