Home » Blog » How Despair Transforms You

How Despair Transforms You 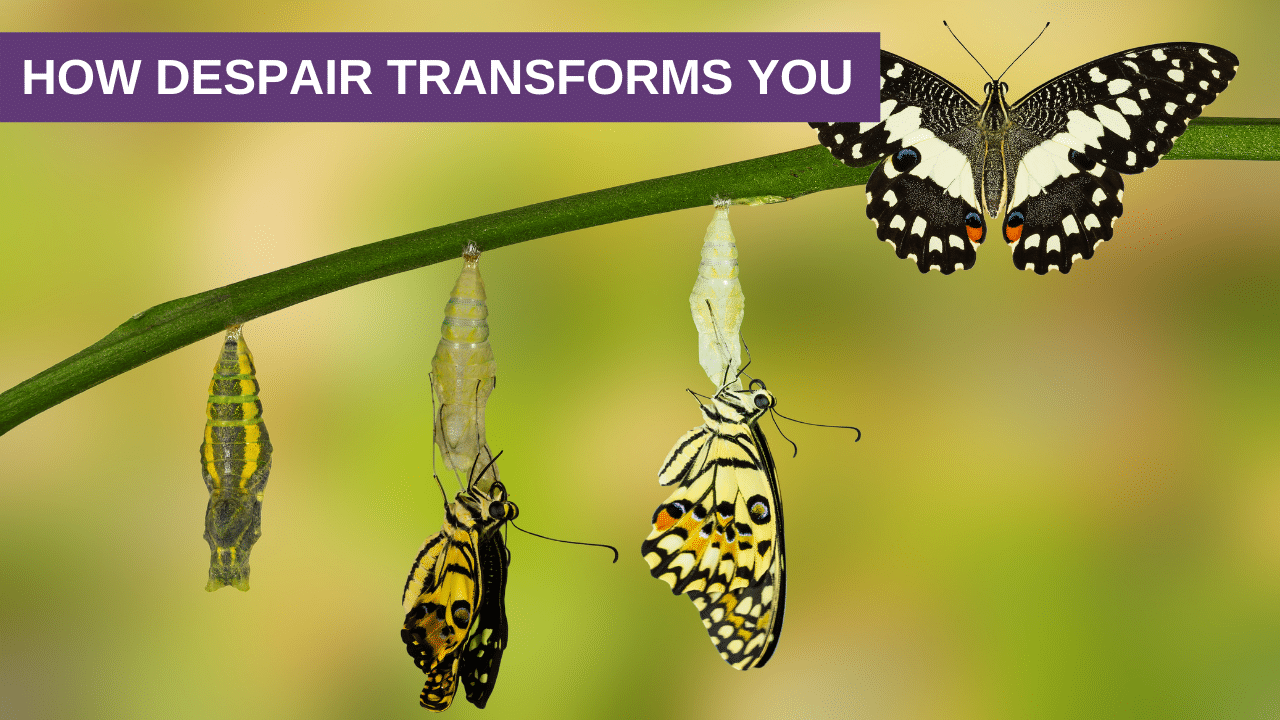 A long time ago but not so far away, lived a girl and a boy very much in love. Gino was tall and handsome with rich brown hair and eyes, good strong Italian looks. Elana was elegant with long sable hair, a classic Greek beauty, her once slender figure swollen with their first child. Only nineteen, she became concerned when she noticed some blood and called her doctor. Her flustered young husband took her straight to the emergency room. After filling out the necessary paperwork, she was examined by the nurse, and labor was induced by the doctor’s order. Yet the doctor never saw her and the nurse was the only one running the emergency room that night.

Labor progressed under the influence of the drugs dripping into her veins, one painful contraction after the next. Elana cried out, begging Gino to do something. He ran to get the nurse, who was too busy to come. The pain intensified and their helplessness was magnified by the sheer lack of professional attention. Elana didn’t know how to do this. She hadn’t been taught how to breathe, unprepared to give birth four weeks early. Gino didn’t know how to help her. He held her hand and brushed the damp hair from her face, but there was nothing he could do to relieve her of her pain or himself of the anxiety.

A ripping contraction, a gush of blood, Elana screamed. Gino ran for help and in the back of the emergency room behind pea-green curtains, Elana was left all alone. The wetness pooled on the bed as the next contraction pushed the baby forcibly through Elana’s pelvis. Bones cracked. Were they hers or the baby’s? Elana cried out, but nobody came. The baby lay silent between her wet thighs. Where’s Gino and the nurse? Somebody please help me!

The pea-green curtains roughly brushed aside, the nurse looked at the baby still between her thighs and muttered, “He won’t make it.” Why isn’t my son crying? Elana thought but anguish stole away her voice as surely as death stole away her son. Gino asked what she could not, but there was no answer only the sound of the knife severing the cord. No longer attached, Elana wailed.

The baby was whisked away before she could see his face. Did he look like Gino? Her husband cried helplessly at her side. An attendant came for her, still soaked in blood on the gurney. “Call Mama!” Her plea cracked through a throat swollen with tears. The attendant threw a sheet over her, the throbbing of her broken pelvis intensified by every bump on the journey. Where are they taking me, she wondered. Through a door and into a brightly lit room, shelves lined with gallon-sized jars surrounded her. Three, seven, five-month fetuses floated lifeless inside the cloudy liquid. Will they put my son in one of these jars? Afraid to know the truth, she didn’t ask when the doctor came to sew her up.

Her mother arrived but could do nothing to ease the pain in Elana’s heart. Gino hardly spoke, ashamed to look at her. Did she do something wrong? Was God punishing her? When she healed enough to walk, she went to church. “What will happen, Father, to my son? Will he go to heaven?” The priest shook his head wondering where the baby was buried. They never gave us the body! What happened to my baby? Afraid, but clutching Gino’s hand, she returned to the hospital, but no one knew what happened. No records of the baby could be found.

Something happened that night between the young couple. She got pregnant again right away. A year later a healthy baby girl was placed in Elana’s arms, but even the joy of new life could not soften the pain in Gino’s heart. As he lost faith in himself, she lost faith in them. Another baby girl born two years later, yet no son. Certainly she didn’t want her husband to go to Vietnam, so Elana stayed as long as she could. She told her beautiful daughters about their brother. “Can we go see him, Mommy?” With no little grave, there were no goodbyes.

After Gino, she met a man with three boys. They never married, but she loved those boys. The eldest was the son she never had. He grew up, met a nice girl, and had babies. Elana loves them like her own grandchildren and especially adores their mother, the only daughter-in-law, she would know.

Over thirty years later, her youngest preparing to give birth to her second grandchild—a son—calls Elana in tears. Her close friend just lost a baby, only four weeks old; the little boy died of a gastric anomaly. “Will that happen to my son, Mom?” Of course Elana reassures her precious daughter, but in her heart she prays that all will be well, because you never know.

The pain revives as Elana shares her story with her daughter-in-law who says something unresolved must be cleared. Perhaps the gift of the baby’s death was in separating from Gino, Elana made room in her life for a man who would revere her as she deserved. Her current husband raised the girls as his own, supporting his wife in her every desire. Elana has become the embodiment of the goddess. A strong lovely woman, wise and compassionate, having learned from her own adventurous and rocky path that life is to be fully enjoyed.

Elana’s son is her little guardian angel, hovering about his earth mother, steering her toward the best in life. And Elana knows without a doubt that death is not an ending, but a transition to another reality, one in which she will fully enjoy when the time comes to join him.

Based on a true story.