How Stress Makes You Gain Weight 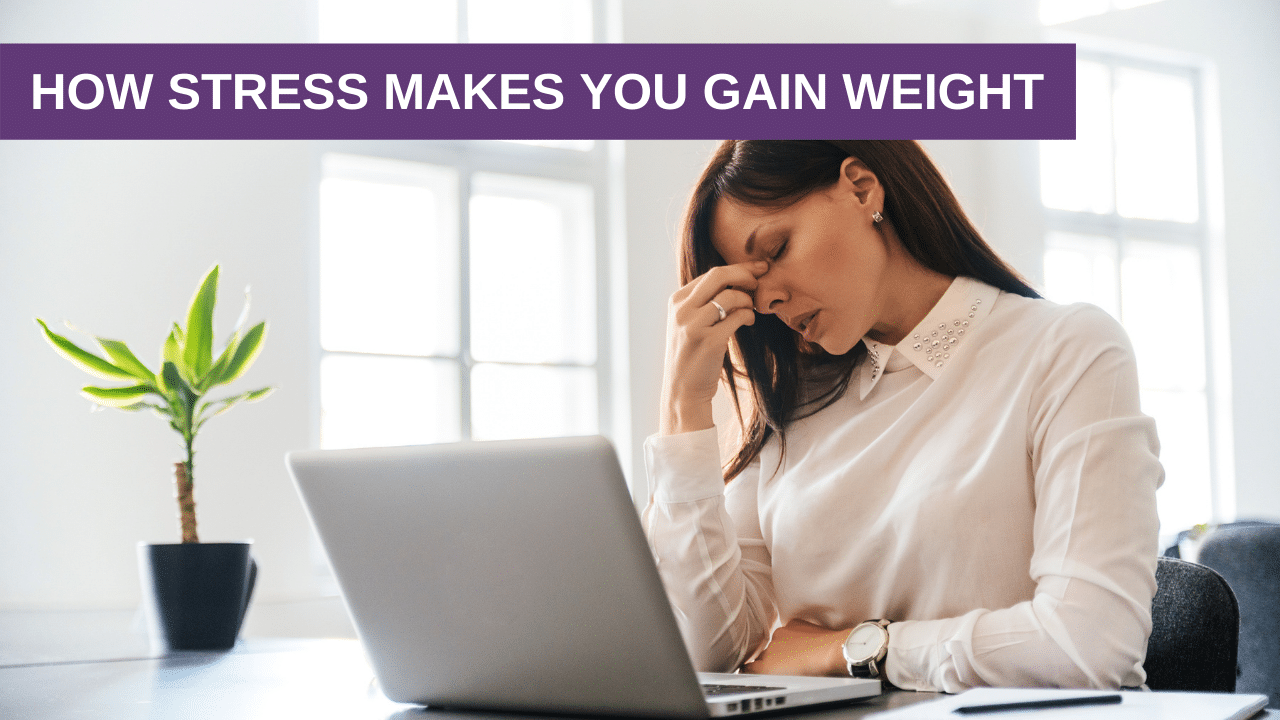 Stress — a fact of modern-day living, and the cause of so many diseases. Stress has been linked to heart disease, cancer, allergies, autoimmune disease, thyroid dysfunction, mood disorders, and obesity.

While stress affects many parts of the body, the adrenals are responsible for creating the stress response.

What are the Adrenals?

The adrenals are small glands that lie on top (ad) of the kidneys (renals). These amazing glands have multiple functions. While the adrenals are endocrine glands producing hormones in response to pituitary stimulus that control carbohydrate, protein and fat metabolism, the adrenals also respond to neurological stimuli to initiate the fight or flight response, as well as electrolytes circulating in the blood to control blood pressure and produce cytokines that influence immune function.

That’s a lot of responsibility for one pair of glands.

So what happens when you are under stress?

First, the adrenals are stimulated by the nervous system and produce adrenaline. Adrenaline increases heart rate and blood pressure to initiate the flight or fight response.

Then the adrenals produce cortisol to fuel the fight or flight response. Cortisol is a catabolic steroid hormone.

Catabolic = breaks down.
Steroid = made from cholesterol.
Hormone = chemical messenger.

Like most endocrine glands, the adrenals are stimulated by the hypothalamic-pituitary axis in a negative feedback system. Think of a seesaw. Cortisol is on one side and Adrenal Cortico Trophic Hormone (ACTH) is on the other. If cortisol is high, ACTH is low. If cortisol is low, ACTH is high.

Cortisol then tells the pancreas to produce glucagon which is the hormone that releases glycogen (stored sugar) from the muscles and the liver. Now your muscles and heart have the energy to get away from that tiger!

Whew! Following the surge of cortisol, the adrenals produce dehydroepiandrostione also known as DHEA. DHEA controls protein and fat metabolism to help repair the damage from the flight or fight. The leftover cortisol is converted to cortisone, a natural anti-inflammatory, to soothe your aches after getting away from the tiger.

At first the high-stress response causes a catabolic reaction as tissues breakdown. You might lose weight initially but over the long haul, the high levels of cortisol can cause you to store body fat. Remember cortisol stimulates the release of stored sugar. How can the glucose get into the cells without insulin? So the pancreas also produces more insulin in response to the stress. If you are really running away from the tiger, then, of course, you will use the glucose. If not, well then, you develop insulin resistance.

What is Insulin Resistance?

Insulin resistance is your body’s way of protecting itself from all that circulating sugar. You see, insulin escorts glucose into the cells. Cells use glucose to produce energy. If the tiger is not really chasing you and you are not expending the energy, then your cells become resistant to insulin. All cells that cannot store sugar become insulin resistant. Your liver and muscles can store about 400 calories worth of glucose. Your heart, on the other hand, cannot store even one gram of sugar. Your heart can only use glucose to beat faster or grow bigger. A bigger heart is not an efficient pump, so your heart becomes insulin resistant.

What does your body do with the extra sugar? It stores it as fat. Thankfully, your adipose cells never become insulin resistant. No, they will store that extra sugar in the form of triglycerides (triple sugar molecules) to protect the rest of your body.

Insulin resistance is why you end up gaining weight after prolonged stress.

My recommendations for stress-induced insulin resistance:

EXERCISE – Yes, exercise is important, but it matters when you do it. Exercise early in the morning to follow the natural cortisol circadian rhythm. Exercising late in the day and especially after dark creates a stress reaction. Exercise induces cortisol production and cortisol opposes melatonin so you will not sleep deeply.

WORK – Take vacations. Work to live, don’t live to work. If you do what you love, look forward to work, then work becomes as therapeutic as play.

SUPPLEMENTS – the key to supplementation is to balance the hypothalamic-pituitary-adrenal response. One of the biggest reasons I created Genesis Gold® is to help balance the stress response.* Adrenal function improves, insulin resistance reverses, and metabolism increases when the hypothalamus is supported. Plus the adaptogenic herbs help provide natural adrenal and hormonal balance.

Years ago, my husband was asked what Genesis Gold® did for him. He said he felt more mellow. We all noticed the change, even the dogs. When he would pay bills he would get so uptight that the dogs would hide. Now they lie happily at my husband’s feet as he navigates the monthly bills!*

Physically, his triglycerides dropped, his waistline slimmed, and he looks younger – the benefits of a healthier metabolism and less stressed attitude. Of course, I was happy he was taking better care of himself, especially since he worked for 30 years as a police officer — such a high-stress job that within a few years of retirement many cops suffer heart attacks and die. He’s been consistent with taking Genesis Gold® since 2008 and it shows — at 53, his lab tests are that of a healthy thirty-year-old.*

So take good care of your adrenals and you’ll stay trim and healthy.

May your Hormones be in Harmony,

*Statements not evaluated by the FDA